How Are Truck Accidents Different from Other Auto Accidents?

Injuries and fatalities can occur in any type of motor vehicle accident. However, when a collision involves a large truck, the consequences can be catastrophic. Even if a small car and commercial truck crash into each other at low speeds, the smaller vehicle occupants can sustain severe injuries requiring emergency medical care.

Despite wearing your seatbelt, following all traffic laws, and taking the precautions necessary to keep yourself safe, you could cross paths with a dangerous truck driver. Avoiding an accident is nearly impossible if someone else behaves recklessly at the wheel. 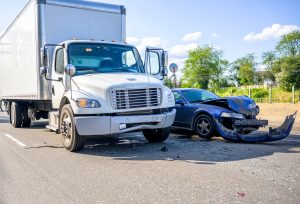 One of the biggest differences between an accident between two cars and one with a commercial truck and a compact car is the size and weight. The typical passenger car can weigh around 3,000 to 5,000 pounds. A tractor-trailer can weigh as much as 80,000 with a fully loaded cargo container. When the two vehicles collide, the entire weight of the truck is behind the force of the impact. It can cause significant property damage and injuries.

Truck drivers can face challenges while maneuvering a long and heavy truck around other vehicles. A greater stopping distance is necessary to bring the truck to a complete stop. “Stopping distance” is the total distance it takes to recognize a perceived danger, step on the brakes, and stop your vehicle. If a truck travels at 65 miles per hour, the driver needs at least 200 yards to bring it to a complete stop.

Commercial trucks have larger blind spots than passenger cars. Most non-commercial vehicles have a blind spot on either side. However, a large truck, such as a tractor-trailer, has a blind spot on all four sides.

Whenever a trucker needs to merge onto a highway, turn right or left, or change lanes, they’re supposed to check every blind spot. Since commercial trucks sit higher off the ground than small cars, the truck driver could drive over another vehicle in their way while changing lanes or pin someone between their truck and another car while taking a turn.

Obstacles Created by the Cargo

Many people store personal belongings, such as clothing or cell phone chargers, in their vehicles. However, the items they keep in their cars aren’t usually as hazardous as the cargo truck drivers transport on the back of their commercial trucks.

Some large trucks contain massive items, such as machinery and furniture. Others carry flammable materials and hazardous waste. Cargo could fall off the truck during a collision, injuring the driver and occupants of other vehicles.

Sharp objects can become projectiles, loose cargo can end up in the middle of the road, creating obstacles for motorists, and toxic substances can cause burn injuries or spark a fire.

It’s possible for the victim of a car crash to suffer severe or even life-threatening injuries. However, accidents involving commercial trucks can be much worse.

The most common injuries include:

Proving Fault Can Be a Time-Consuming Process

Typically, with other auto accidents, one of the drivers involved in the collision is at fault.

It can be an uphill battle to determine who should be held liable for a truck accident. That’s because multiple parties can be involved in the case. Although the truck driver was at the wheel when the crash occurred, another person or company’s actions could have contributed.

If you were involved in an accident with a commercial truck and believe the truck driver or another party’s negligent actions caused it, contact Sampson Law Firm right now to discuss your case and learn about your legal options.

Our legal team can determine who should be held liable and help pursue the maximum compensation possible in your case. We will fight by your side for the justice you deserve.

Questions? Contact us today to start your free evaluation.